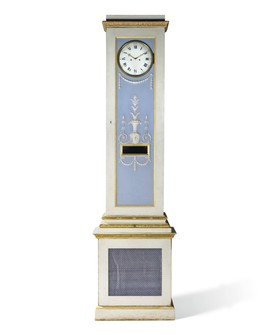 The delicate blue and white painted decoration case of this superb longcase musical organ clock embodies the Neoclassical style in Sweden in the late 18th century, known as the Gustavian style, promoted by Gustaf III thanks to his cultural interests and passion for architecture (H. Groth, Neoclassicism in the North, London, 1990, p. 7). The coloring of this clock, white against a Wedgwood Blue ground, recalls ceramic jasperware, first developed by Josiah Wedgwood in the 1770s, with relief decoration in contrasting white giving a cameo effect that proved to be fashionable throughout Europe. The case was most likely made by Pehr Ljung after a design by Louis Masreliez. Ljung was probably the most skilled and famous sculptor of furniture and interiors during the Gustavian period. He had many commissions from King Gustav III including the Royal ship Amphion, the palace of Princess Sophia Albertina and Haga Pavilion, his most celebrated commission.

Pehr Strand is regarded as the foremost organ builder and maker of musical clocks in Sweden around 1800; his clients comprised royalty, noblemen, merchants, and factory owners. Although to date it is unknown where Strand learnt his skill, his style resembles that of his contemporaries, Olof Schwan (1744-1812), Jonas Ekengren (1736-1793) and Pehr Niclas Forsberg (1733-1798). In 1791, Strand, who had a workshop in Stockholm, was granted a charter to build small organs and toy actions. Renowned for his very fine craftsmanship, the musical repertoire of these Swedish clocks was principally music arranged for the keyboard, published by Olof Ahlström in the periodical, Musikaliskt Tidsfördrif. These mechanical organs were often built into clocks after designs by Louis Masreliez, such as the present example. There are about fifty surviving Strand instruments including examples of his work in Forsmark Church (1800), Uppland; the old church, Sabbatsberg, Stockholm (1804, now in the Nordiska Museet, Stockholm); Tångeråsa (1806), and Närtuna (1818). In 1824, his workshop was taken over by his son, Pehr Zacharias Strand (1797-1844), who became equally celebrated in Sweden. Pehr Zacharias is believed to have been a good organ player, and it is probable he assisted his father with the programming of the musical clocks.

Provenance: Probably Samuel af Ugglas (1750-1812) Forsmark Bruk Castle and then by descent at the af Ugglas Castle at Lennartsnäs Castle north of Stockholm.