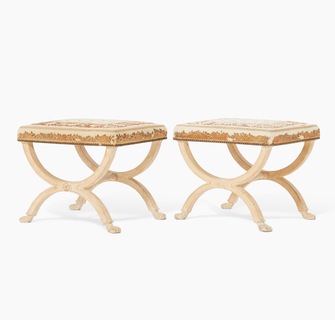 A pair of painted Directoire curule-shaped or X framed stools. Made around 1800. They are in good condition with a worn original paint surface. Could benefit from a reupholstering.

Directoire style was a period in the decorative arts, fashion, and especially furniture design in France concurrent with the Directory (1795-1799), the later part of the French Revolution. The style uses Neoclassical architectural forms, minimal carving. It is a style transitional between Louis XVI and Empire.
The Directoire style was primarily established by the architects and designers Charles Percier (1764–1838) and Pier François Léonard Fontaine (1762–1853). In its use of Neoclassical architectural form and decorative motifs the style anticipates the slightly later and more elaborate Empire style, which was introduced after Napoleon established the First French Empire.
The sources of inspiration are Etruscan, Roman and Louis XVI style.

A curule seat is a design of a (usually) foldable and transportable chair noted for its uses in Ancient Rome and Europe through to the 20th century. Its status in early Rome as a symbol of political or military power carried over to other civilizations, as it was also used in this regard by kings in Europe, Napoleon, and others.
In the Roman Republic and the Roman Empire, the curule chair (sella curulis, supposedly from currus, “chariot”) was the seat upon which magistrates holding imperium were entitled to sit.