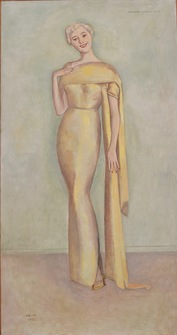 A Full-Length Portrait of Tatiana Angelini-Jolin By Einar Jolin

Exhibited at Liljevalchs Konsthall in 1957.

Einar Jolin was a Swedish painter best known for his decorative and slightly naïve Expressionist style. After studying at Konstfack, Stockholm in 1906 and at the Konstnärsförbundet målarskola (the Artists Association Art School), Jolin and his friend Isaac Grünewald went to Paris for further studies at Henri Matisse’s academy from 1908 to 1914.

He painted portraits, still lifes and cityscapes, always accentuating what he called “the beautiful” in his motifs. He mainly worked in oils and watercolors, using delicate brush strokes and light colors. His most noted works are his paintings of Stockholm during the 1910s and 1920s in his trademark naïve style.

Jolin made numerous travels, collecting impressions and inspiration for his paintings. He journeyed to Africa, India and the West Indies, but favored the countries around the Mediterranean Sea, especially the island of Capri where he also exhibited his works.

He had several exhibitions at Liljevalchs Konsthall in Stockholm and in 1954, he toured the United States with an exhibition, during which Dag Hammarskjöld purchased a painting for his office in the United Nations building.