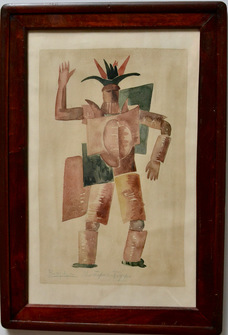 Kazimir Malevich was a painter and art theoretician, pioneer of geometric abstract art, and the originator of the Avant-garde Suprematist movement.

Beelzebub or Beelzebul is a name derived from a Philistine god, formerly worshipped in Ekron, and later adopted by some Abrahamic religion as a major demon. The name Beelzebub is associated with the Canaanite god Baal.
In theological sources, predominantly Christian, Beelzebub is another name for Satan. He is known in demonology as one of the seven princes of Hell. The Dictionnaire Infernal describes Beelzebub as a being capable of flying, known as the “Lord of the Flyers”, or the “Lord of the Flies”.

Mystery-Bouffe is a socialist dramatic play written by Vladimir Mayakosky (1893-1930) in 1918/1921. Mayakovsky was the leading poet of the Russian revolution of 1917 and of the early Soviet period.

The title Mystery-Bouffe is likely a reference to the opera buffa/opéra bouffe, comic opera genres popular at the time. The original version was directed and produced by Vsevolod Meyerhold (1874-1940) and the art was done by Kazimir Malevich. The premiere was in the Theatre of Musical Drama on November 7, 1918.

The play is about the Unclean and Clean: At the North Pole, an international group of survivors speaks of the new flood of the Bolshevik Revolution which has engulfed the world. However, Western politicians, the Clean, have commandeered an ark built by the Unclean. On the ark, the Unclean are brutally oppressed, first by a tsar and then by a ‘democratic’ government of the Cleans – which is merely a ‘tsar with a hundred mouths’. The Unclean throw them overboard and follow the Man of the Future towards an earthly paradise, which they will build for themselves. In hell, the Unclean tell Beelzebub and his fellow devils that earthly torments are far worse than anything hell can offer. In paradise, the Unclean condemn those who are venerated but who had unproductive lives. God is so outraged that he threatens to destroy the Unclean, but they appropriate his thunderbolts to produce electricity. Entering the gate to the Promised Land, the Unclean are fed by Storegoods,
brought to them by Hammer and Sickle. The machines apologize for the harm they did the Unclean, explaining that they were exploited by the fat men but that they will now serve the workers. In a final triumphant chorus, workers, machines, and tools sing of the joyful revolution.