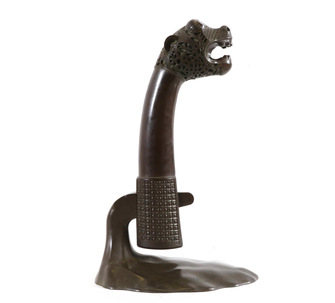 A very fine bronze sculpture copy of a fantasy Viking animal head sculpture. Commissioned and made ca.1911. Scale 1:1. The original famous sculpture is made of wood and was found in Norway, near Oseberg on an important Viking archeological discovery burial site in 1903. See included photo. The tradition says that it´s the burial site for Queen Drottning Asa av Vestfold, mother of Halvdan Svarte and grandmother of Harald Hårfagre.
Five similar animal head posts were found in the Oseberg Viking ship grave dating back to the year 834 AD. The posts are made by different woodcarvers. Some believe these are dog heads, however, they may as well be depicting bears, or symbolizing animals from Old Norse mythology like Odin’s wolves, Freya’s cats, or the Midgard Serpent.

Today, four of the animal head posts are exhibited at the Viking Ship Museum at Bygdøy in Oslo. The Oseberg burial site is the richest equipped Viking grave ever found.

The bronze was probably a special one-off commission for the original owner.

Foundry stamped "Herman Bergman konstgjuteri. Herman Bergman Konstgjuteri, also called Bergmans Konstgjuteri is an art foundry founded in 1895 in Stockholm. They have throughout the 20th century been one of the foremost foundries for Swedish artists.

Provenance:
Fam. Nydqvist to present day. Villa Elfhög.
Nydqvist was one of the founders of NOHAB which became one of Sweden’s best engineering companies making steam-machines, locomotives, turbines, airplane engines, and more during the 19th century and first half of the 20th century.