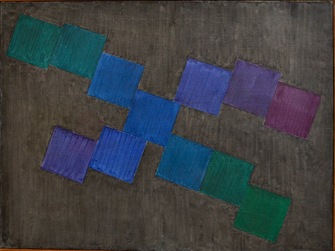 Gert Olof Marcus was a Swedish painter and sculptor. He was born in 1914 in Hamburg and died in Stockholm in 2008.

Marcus’ father was a German and his mother, Hilda Maria Dahl, was Swedish. The father was of Jewish descent so, with the rise of Nazism, the family had to flee Germany. Gert Marcus moved to Sweden in 1933

Apart from a few months studying at the Otte Skölds målarskola (1936–37) and some months at the Ateneum School in Helsinki, Finland (1937–1938), Gert Marcus was an autodidact. He became one of Sweden’s most consistent concretists, even if he distanced himself from all “isms”. Marcus lived most of his life in Stockholm but he worked for long periods in France in Menton, L’Esconil (Brittany) and Paris, and in Italy at Massa-Carrara.

Early in his life, he was influenced by Paul Cézanne’s attempts in determining how to create space and volume without the use of Renaissance perspective. This led to Marcus’ creating a color theory – which he was faithful to during his entire artistic career. Work on volume and color opened for him a road to bas-reliefs and eventually to sculpture.

In the 1950s, Gert Marcus was awarded several commissions, including that for a wall mosaic in Sankt Mikaels Chapell in Mora in 1954, another mosaic in Stockholm’s Police Headquarters in 1957, a choir wall in the church of Vantör in Stockholm, and a wall mosaic in finely crushed glass in Sergelteatern in 1959. Marcus was frequently commissioned to provide sculptural monuments in public spaces in Sweden and even to design the interior of the Bagarmossen metro station in Stockholm.

In 1999 Gert Marcus was awarded the Prince Eugen medal by the King of Sweden for “outstanding artistic achievement.”