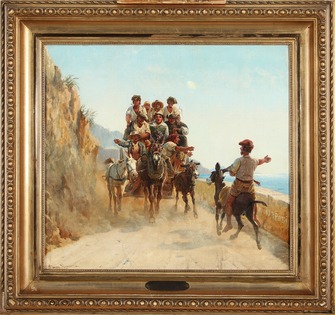 Scenic view by Simon Simonsen from the Bay of Naples with villagers on a wagon traveling on a coastal road.

A fine painting by Simon Simonsen (1841-1928) of a scenic view from the Bay of Naples with villagers on a wagon traveling on a coastal road. Signed. Oil on canvas. The canvas mounted in a period giltwood frame.

Simon Ludwig Detlev Simonsen was born in 1841 in Munich as the son of the painter Niels Simonsen. The family moved to Copenhagen when he was four years old. Starting from an early age, his father taught him drawing.

He went to the Academy of Fine Arts in Copenhagen from 1855 to 1860. At the age of 18, he received his first Neuhausenske Price. He undertook study journeys to France and Italy.

Simonsen liked to portray animals and concentrated on the interaction between the animals, as well as between animal and human being. He aimed for depicting the individual character of each animal, and this feature makes his oeuvre special.