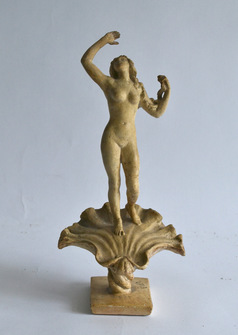 A patinated plaster sculpture study of Venus by Carl Eldh (1873-1954). Signed “Eldh” . Eldh´s Venus was created for The Stockholm Exhibition in 1930. A large bronze sculpture of Venus was exhibited there.

Eldh studied sculpture at the Académie Colarossi in Paris, where the French sculptor Auguste Rodin inspired him greatly. His first works were characterized by softer forms, but by 1916 he had developed a powerful realistic style, as with the Strindberg Monument in Tegnérlunden in Stockholm. Strindberg was a frequent subject for Eldh.
Carl Eldh ranks along Carl Milles with the most popular Swedish sculptors of the first half of the 20th Century. Eldh also produced architectural sculpture with renowned Swedish architects, among them Ivar Tengbom, Erik Lallerstedt and Ragnar Östberg. Östberg designed Eldh’s own studio in Bellevue Park, in the north of Stockholm, in 1918.
Eldh’s major public works include the grand statue of Strindberg in Stockholm and the Branting Monument, also in Stockholm, which was first executed in plaster around 1930 and completed in 1952.
The Carl Eldh studio in Bellevue is now a public museum.