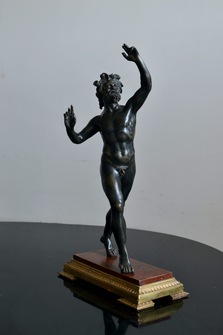 A finely cast Grand Tour bronze sculpture of The Dancing Faun or Il Fauno Danzante. On a gilt-bronze base. With a nice and beautiful surface patina.

The Dancing Faun was discovered in 1830 in the ruins of the most impressive and opulent Roman home at Pompeii, later known as the House of the Faun. The faun is thought to be either a 2nd Century Greek original or a Roman copy. Today the original is in the National Archaeological Museum in Naples.

The Grand Tour of the late 17th, 18th and 19th centuries saw many upper class, wealthy and aristocratic people travel to Italy and Europe, particularly Rome, Venice and Florence, for pleasure, education and inspiration.
The term ‘Grand Tour’ was coined by the Catholic priest and travel writer Richard Lassels (circa 1603-68), who used it in his influential guidebook The Voyage of Italy, published in 1670, to describe young lords travelling abroad to learn about art, architecture and antiquity.

Robert Adam wrote of Rome in 1755, ‘Rome is the most glorious place in the universal world. A grandeur and tranquillity reigns in it, everywhere noble and striking remains of antiquity appear in it, which are so many that one who has spent a dozen years in seeing is still surprised with something new…’

Many Grand tourists collected souvenirs in the form of bronze and marble models of sculpture and architecture, and formed collections of Grand Tour objects.