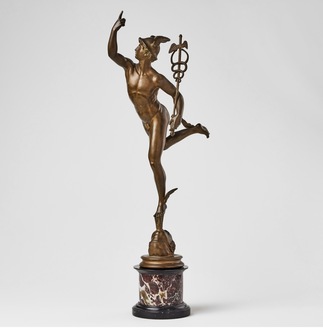 A very fine 19th century signed Grand Tour bronze sculpture of Mercury, also called Mercurius, by the Benedetto Boschetti workshops. The model of Mercury is after the celebrated sculptor Giambologna (1529-1608), also known as Giovanni da Bologna. He was the last significant Italian Renaissance sculptor, with a large workshop producing large and small works in bronze and marble in a late Mannerist style. Signed B. BOSCHETTI ROME

Benedetto Boschetti (1820-1879) and his workshop was renowned for the exceptional quality of their copies of works from antiquity. He was considered as the most eclectic and certainly the most visionary virtuoso of this type of work at the time. The Boschetti Workshop exhibited and was awarded a medal at the Great Exhibition of 1851 in London in the Crystal Palace. He worked from his premises at 74 via Condotti in Rome, Boschetti from where he supplied the extremely high quality works of art to satisfy the academic and sophisticated tastes of young Englishmen and others on the Grand Tour.

Mercury or Mercurius is a major god in Roman religion and mythology. He is the god of financial gain, commerce, eloquence, messages, communication, travelers, boundaries, luck, trickery, and thieves. He also serves as the guide of souls to the underworld.