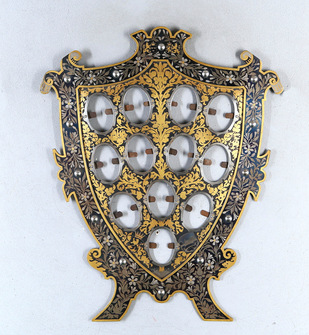 A 19th century Swedish engraved and gilt steel and damascened shield shaped 12-picture or photo frame. Signed B Beskow for Bernhard Beskow (1837-1910) Beskow was an artist specializing in engraving, damascene and the gilding of steel and became a very popular master in the end of the 19th century.
The frame is engraved with the Swedish Coats-of-Arms and Västergötlands Coat-of Arms. With a small motif on the frame´s lower right of a locomotive and text “No 1 Trollhättan 1866 A Nydqvist” It is an image of the first locomotive made by the company Nohab. Antenor Nydqvist was one of the founders of Nohab which became the largest locomotive manufacture in Sweden exporting locomotives also to Russia and other countries. They also produced other things of steel and made for example parts to the ship Titanic and to the channel locks of the Panama channel.
This picture frame is made during the end of the 19th century