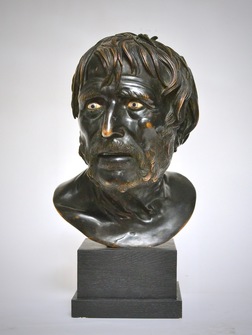 A 19th century Italian bronze bust study of Seneca , after the antique , known as the “Pseudo Seneca”.
Arresting bronze study known as the “Psuedo Seneca” , after the Roman 1st century BCE original , having been excavated at ill-fated Herculaneum from the site of the Villa of the Papyri in 1754. The Papyrus Villa belonged to Lucius Calpurnius Piso Caesoninus , father-in-law of Julius Caesar , and was buried by the eruption of Mount Vesuvius in 79 .
Originally thought to depict Seneca the Younger , Lucius Annaeus Seneca , the notable Roman philosopher. However latterly ,scholars now believe it to be a fictitious portrait , either Hesiod or Aristophanes.
The head study displays a remarkable quality of workmanship with the casting of the accentuated wrinkles and folds of the face and forehead of the man .
The original bust now conserved and exhibited in the Museo Archeologico Nazionale , Naples Italy.
The eyes with stone inlays, also as portrayed in the antique original .