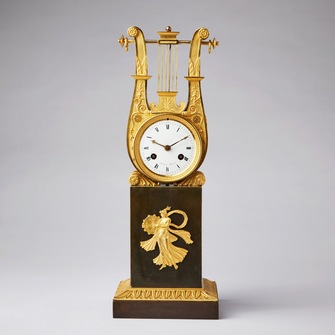 A fine gilt and patinated early empire gilt bronze clock attributed to Thomire. Dial signed Manière Paris. The lyre shaped clockcase is of very high quality with the gilding and the patinated surface in very good condition. The enamel dial is signed Manière Paris with gold text and has some chips around the keyholes. On the lower part of the clock under the dial is a large gilded female godess, probably of Cybele holding a tambourine or hand drum also called a Tympanon.
In ancient Greece and Rome, the tympanon, was a type of frame drum or tambourine. It was circular, shallow, and beaten with the palm of the hand or a stick. It was the most common of the musical instruments associated with the rites of Cybele in the art and literature of Greece and Rome. The drum continued to feature as an attribute of Cybele into the Roman Imperial era.

Pierre-Philippe Thomire (1751–1843) a French sculptor, was the most prominent bronzier, or producer of ornamental patinated and gilt-bronze objects and furniture mounts of the First French Empire.

Charles-Guillaume Manière, the son of a Parisian master clockmaker, became a master himself in 1778. Early in his career, he worked for the Parisian marchands-merciers Dominique Daguerre and Francois Darnault. He collaborated with noted cabinetmakers and bronze casters, including Pierre-Philippe Thomire and François Rémond, who produced the cases for his clocks. Manière died in 1812.