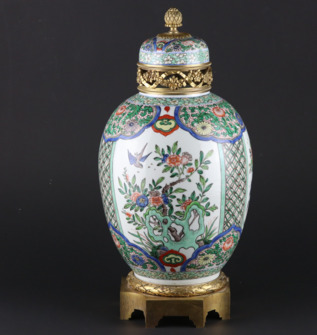 Edmé Samson (1810-1891), founder of the porcelain firm Samson, Edmé et Cie (commonly known as Samson Ceramics), was a famous copyist of porcelain and pottery. The firm produced high-quality copies or imitations of earlier styles of porcelain, mainly 18th-century European and Chinese and Japanese porcelain, but also earlier styles such as Italian maiolica.
Samson began his career by making service and set piece replacements in the late 1830s. In 1845 he opened the ceramics firm Samson, Edmé et Cie at 7, Rue Vendôme (later Rue Béranger) in Paris, with the intention of supplying reproductions of ceramics on display in museums and private collections. The firm either drew inspiration from other factories, or directly copied their pieces.
During the 19th century, the collectors’ market for antique fine china was considerable, and Samson’s firm reproduced ceramics many styles including the faience and maiolica types of Italian pottery, Persian style dishes, Hispano-Moresque pottery and more. Also copied by the Samson firm were the early Qing dynasty famille rose and famille verte Chinese porcelains and the so-called “Imari wares”. The firm exhibited at the International Exposition (1867) and the Exposition Universelle (1889).

The Kangxi Emperor (1654–1722) was the third Emperor of the Qing dynasty, and the second Qing emperor to rule over China proper, reigning from 1661 to 1722.
Being in ruling for 61 years makes him the longest-reigning emperor in Chinese history (although his grandson, the Qianlong Emperor, had the longest period of de facto power.
The Kangxi Emperor is considered one of China’s greatest emperors.