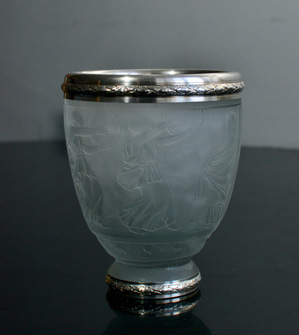 An Early 20th Century Georges de Feure Small Art Nouveau Glass and Silver Vase. The glass with decoration of classic antique scenes of women. Signed in the bottom.
Georges de Feure (1868 –1943) was a French painter, theatrical designer, and industrial art designer in the symbolism and Art Nouveau styles.
De Feure was born in Paris. In 1886, de Feure was one of the eleven students admitted at the Rijkscademie voor Beeldende Kunsten in Amsterdam, which he did however leave very quickly for Paris since he felt that formal academic training had nothing to offer him. Being of very independent nature, de Feure never again took up formal artistic studies, and forged his own independent path. He was however influenced by Jules Chéret in his postersl and became the key designer of Siegfried Bing for L’Art Nouveau.
He showed work in the Exposition Universelle de Paris exhibition in 1900. He designed furniture, works of art, created theater designs for Le Chat Noir cabaret and more.
In August 1901, de Feure was nominated Chevalier de la Légion d’honneur for his contribution to the decorative arts.