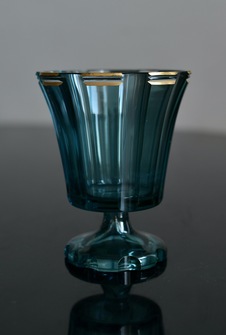 Elis Bergh, was an architect and designer, best remembered for his glass art and fixtures. His real name was Elias Bergh, but he became known by the nickname “Elis”.

Bergh began his career as an architect in 1902, but early in his career was given an interior design assignment for Kosta Glasbruk. With assignments for Böhlmark’s lamp factory, Pukeberg’s glassworks and as factory manager at Herman Bergman’s art foundry, he eventually returned to Kosta to become their artistic director 1928-1950. He continued as a consultant at Kosta until his death in 1954.

As a glass artist, Bergh designed tablewares and was popular for his sense of the simple and graceful, something that stands modern and timeless to this day.
Today, many agree, and he is a coveted name for many collectors and decorators.
Bergh was also a graphic artist, engraver and illustrator and also worked in goldsmithing. For Hallbergs guldsmeds AB, he exhibited in the Paris exhibition in 1925 and earned a gold medal.

Elis Bergh is represented in, among others, the National Museum, the Röhsska Museum and the Metropolitan Museum in New York.