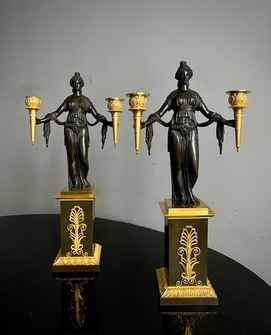 A very elegant and fine pair of gilt and patinated empire candelabra of superb quality. Possibly made in England and from the Benjamin Vulliamy workshops. Under the base possibly dated 1811. Gilding is in very good condition and the chasing of the bronze is of very high quality. Although the Vulliamy family is mostly famous for their clocks they also designed candelabras and other decorative pieces. Sometimes candelabra was part of a set with a clock in the centre and made for a mantelpiece.

Benjamin Vulliamy ( 1747-1811) was the son of Justin Vulliamy, a clockmaker of Swiss origin, who moved to London around 1730. Benjamin worked with his father until his death in 1797.
From an early age, Vulliamy had shown interest in pursuing his father’s career. As an adult, he began to earn a reputation as a builder of mantel clocks, decorative timepieces that adorned the halls of high society. His talent earned him a Royal Appointment in 1773, and he became George III’s King’s Clockmaker.

Around 1780, Vulliamy was commissioned to build the Regulator Clock, the main timekeeper of the King’s Observatory Kew, which served as an unofficial Prime Meridian and was responsible for the official London time until 1884. The Regulator Clock is now in the Science Museum in London.

Benjamin Lewis Vulliamy (1780-1854) was the son of Benjamin Vulliamy and was the last Vulliamy to dedicate himself to the family clockmaking business.

Vulliamy clocks were of considerable value and represented the climax of technology at the time. A Vulliamy clock was presented to the Chinese emperor by the diplomatic mission of George Macartney to Beijing in 1793. Vulliamy clocks were sometimes combined with fine porcelain figures to create artefacts that combined both science and art. The overall designs was made by Vulliamy but he employed prize-winning sculptors such as John Deare, John Bacon and Charles Rossi to create the figures that were influenced by contemporary French designs. The Vulliamy business also subcontracted much of the clocks’ manufacture to other skilled artisans, and Vulliamy would only oversee and create the final adjustments before sale.