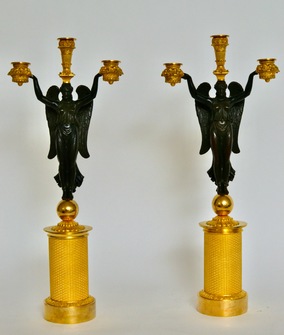 Pair of Empire Period Candelabra By Thomire and Rabiat

This rare pair of Empire period candelabra was designed by Pierre-Philippe Thomire and and most probably executed by Claude François Rabiat. There are known examples signed by Rabiat. They each have three lights, carried by winged Victories. These winged female figures were very characteristic of the Empire period.
Top bronzier Pierre Philippe Thomire used these winged Victories in the design of this pair of candelabra with three sconces in gilt and patinated bronze. Each of these Victories holds in her raised arms a basket of flowers simulating bobeches. It is rare to find candelabras of the empire period with a round base as in this case.

Claude François Rabiat (1756-1815) was a foundry-chaser who received master in 1778. He was very famous and worked mostly with top bronziers like Thomire, Feuchère and Galle.

Pierre-Philippe Thomire (1751–1843) a French sculptor, was the most prominent bronzier, or producer of ornamental patinated and gilt-bronze objects and furniture mounts of the First French Empire.
An almost identical pair of candelabra was delivered to the Garde-Meuble by “Thomire Duterme”. It was destined for the living room of the apartment of the Count of Nantouillet at the Elysée Palace.

The quality of these candelabras are exceptionally good.