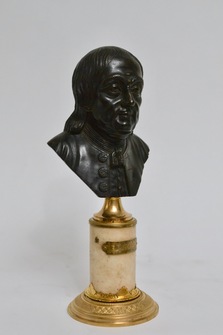 A fine and rare patinated Louis XVI bronze bust of Benjamin Franklin (1706-1790) on a gilt bronze and white marble base.

Benjamin Franklin was one of the Founding Fathers of the United States. Franklin was a renowned polymath and a leading author, printer, political theorist, politician, freemason, postmaster, scientist, inventor, humorist, civic activist, statesman, and diplomat. As a scientist, he was a major figure in the American Enlightenment and the history of physics for his discoveries and theories regarding electricity. As an inventor, he is known for the lightning rod, bifocals, and the Franklin stove, among other inventions. He facilitated many civic organizations, including Philadelphia’s fire department and the University of Pennsylvania.

Franklin earned the title of “The First American” for his early and indefatigable campaigning for colonial unity, initially as an author and spokesman in London for several colonies. As the first United States Ambassador to France, he exemplified the emerging American nation.

His colorful life and legacy of scientific and political achievement, and his status as one of America’s most influential Founding Fathers have seen Franklin honored more than two centuries after his death on coinage and the $100 bill, warships, and the names of many towns, counties, educational institutions, and corporations, as well as countless cultural references.